We could work 24/7 and still not keep up with the number of events, activities, restaurants, and things to do provided in the area, but we'll do our best with the Atlanta Guide to introduce you to some new opportunities.

Peachtree Street, Peachtree Circle, Peachtree Center Avenue…. As a matter of fact, there are more than 50 streets in the Atlanta area that bear the Peachtree name. So, you need an Atlanta guide straight out of the gate.

With this in mind, you may want to put away the GPS and pull out an actual printed map (yes, they still exist!). Otherwise, you could be in a Peachtree maze.

Atlanta was founded as a transportation hub at the intersection of the Western and Atlantic railroad lines. It was known as Marthasville in its early days, named after the former governor's daughter. But, Atlanta is the female derivation of Atlantic and that just seemed more apropos.

With the 9th largest metropolitan area in the United States, Atlanta has more than its share of suburbanites. Residents of Atlanta's outlying areas like Buckhead, Dunwoody, Decatur, and College Park enjoy the best of all worlds. While they incur slightly lower property costs, a big city in just a small commute.

It doesn't matter if you're a newcomer or a lifelong resident, though, there's so much going on in the area. Regardless, our Atlanta guide is designed to help you stay on top of it all. 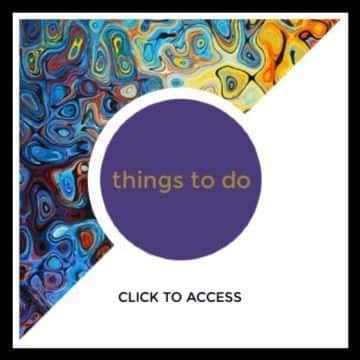 The guide to all kinds of things to do in Atlanta. You can access Atlanta event calendars, sports schedules, classes, plays, musicals, fairs, festivals, outdoor activities, and more. 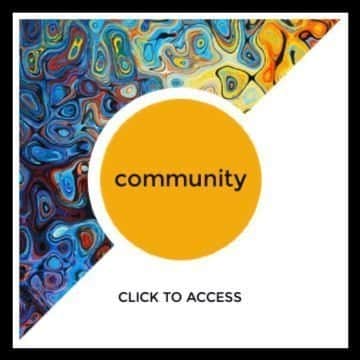 Instead of just providing information for tourists visiting the area. We want to focus on the Atlanta lifestyle with information for locals including area groups, churches, senior living, and more. 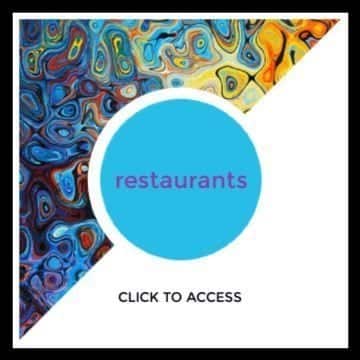 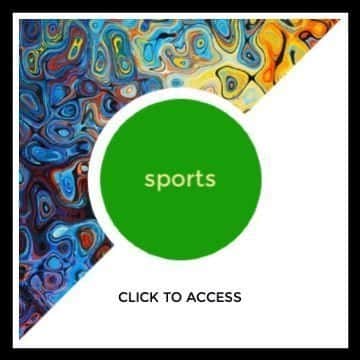 Atlanta is known for headquartering companies like Coca-Cola, Home Depot, CNN, and UPS.

However, Delta Airlines happens to be the biggest employer. Delta's employee base is housed at the Hartsfield-Jackson Atlanta International Airport, aka the world’s busiest airport. Over 2,700 arrivals and departures as well as 275,000 come and go out of Hartsfield every day.

Sherman may have burned most of Atlanta to the ground in 1864, but Atlanta rebuilt itself into one of the meccas of the south. Atlantans enjoy the good weather and take advantage of plenty of outdoor activities.

The other options are nearly endless with shopping, museums, entertainment, sports, and 17 colleges and universities. In addition, Atlanta has one of the better US-based public transportation systems.

That's important because you won't have an excuse to not take advantage of everything the city has to offer. You've got parks, family-friendly activities, special events, and more at your disposal. Since there's something for everyone, it’s no wonder that the metro area population has doubled in the last decade.

Bookmark our Atlanta guide to stay current with all of the goings-on in this amazing Southern City!

Atlanta Guide to Arts and Entertainment

The list of shows on the Atlanta entertainment calendar goes on and includes something for everyone. Therefore, we've designed our Atlanta guide to provide you with current and upcoming events of all shapes and sizes.

If you’re in the mood for laughs, the Punchline and Village Theater are just a few of your choices. They host touring comedians and local favorites.

The Basement Theater has an in-house troupe, welcomes guest performers, and can even put the spotlight on an audience member.

While some cities are fortunate to have one or two comedy clubs, Atlantans have plenty of choices. Dad’s Garage, Uptown Comedy Corner, Atlanta Comedy Theater, Relapse, and Highwire Comedy Company still comprise just a partial list. 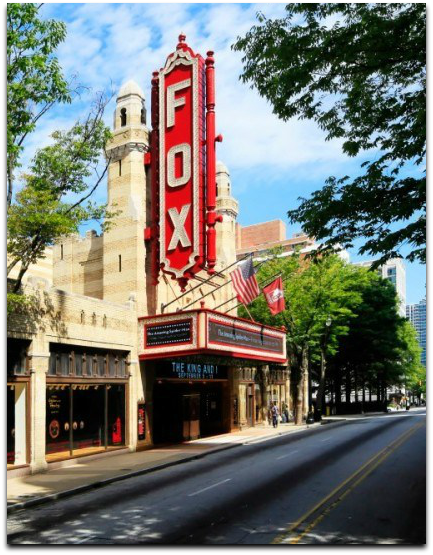 You may be familiar with the famous Fox Theatre, a real Atlanta landmark. Nearly 90 years ago, the Fox opened its doors on Christmas Day. The sold-out show featured Disney’s first Mickey Mouse cartoon, Steamboat Willie.

These days, the Fox presents 250 shows annually and welcomes over a half million visitors. If you’re interested in a "behind the scenes" look, you can take a 60 minute guided tour. Entertainment at the Fox includes the best of Broadway on Tour, concerts, retro acts, lectures, and more.

While the Fox may be one of the more well-known names, Atlanta is the place to go for musicals and theatrical events of all scopes and sizes. Community theater is prevalent in Hot-lanta and an evening out can be quite affordable, even for the entire family.

You can take in a play at the Alliance, participate in dinner theater at Agatha’s A Taste of Mystery, or catch your favorite act on tour at the Cobb Energy Performing Arts Center.

Atlanta happens to be one of the few cities to have a permanent company in all of the major arts and entertainment disciplines. The city hosts the best in entertainment from the Atlanta Ballet to the Atlanta Opera, and Atlanta Symphony Orchestra.

The Atlanta Symphony was established in 1945. Its home venue is the Woodruff Arts Center, but the talented group of musicians performs over 300 concerts annually.

Art and other Museums

The High Art Museum is one of the most visited art museums in the world, and general admission is just $14.50. You can also become a member and enjoy free tickets every time you visit.

The Atlanta Contemporary Art Center and the Museum of Design Atlanta are just a few of the other formal museums. Street art is also alive and well, though, with some of the best pieces indicated on the Atlanta Street Art Map.

You'll never lack for things to do with all of the events and showings provided by the Atlanta area Arts & Entertainment Community.

Visit our Atlanta Guide and Event Calendars (and visit often) for more ideas, as well as specifics on tickets, pricing, and more.

You can also check out OTL Atlanta for seat filler information if you're interested in attending some amazing community theater, comedy, music, and more - through FREE seat filler tickets. 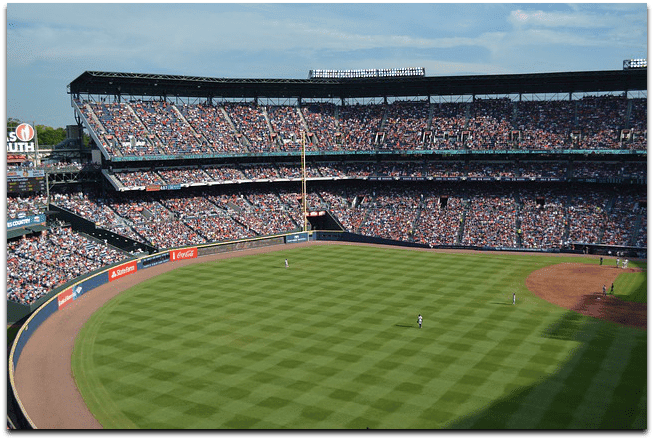 More on the events calendar

Atlanta has also hosted its share of one-off sporting events like NCAA Basketball, the PGA Tour, Wrestlemania, and the Chick-Fil-A Peach Bowl.

In 2017, the Atlanta Braves moved into the brand new SunTrust Park stadium that seats over 40,000 and will double as a concert venue.

Be sure to check out the Atlanta City Guide Event Calendar section for upcoming sporting events, large and small.

Camping, hiking, and fishing at Stone Mountain just scratch the surface of outdoor activities in the greater Atlanta area. After all, that beautiful southeastern US weather makes it enticing for residents to enjoy their surroundings.

Chastain Park and Piedmont Park are just of few of the family-friendly facilities with gazebos and pavilions to accommodate small picnics or large gatherings. With playgrounds, tennis courts, golf courses,and all kinds of outdoor enticements, the Atlanta area has it all so we strive to have our Atlanta guide provide it all.

The Atlanta Guide provides information on outdoor events and activities for every season. Visit the guide's Things to Do section as well as events and sports calendars to find out more. 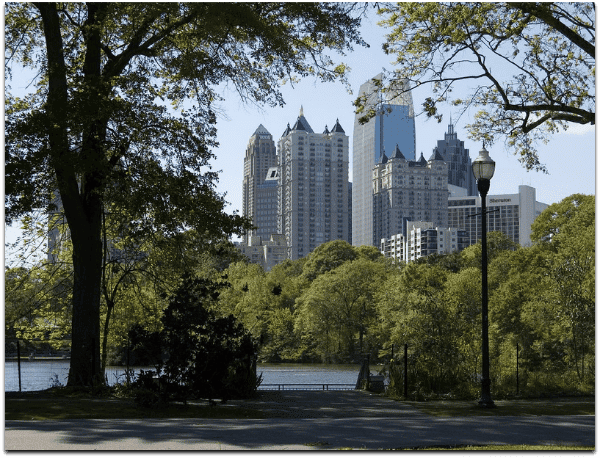 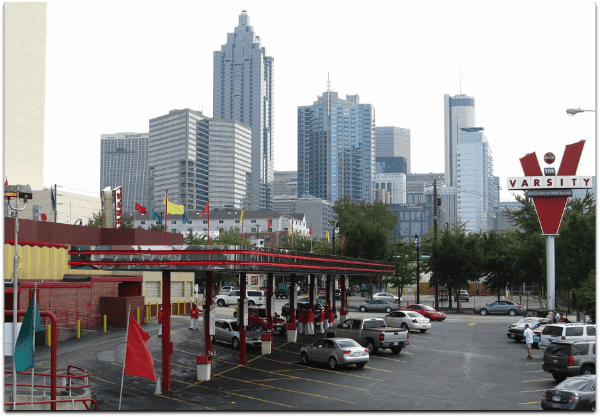 Without a doubt, you don’t have to look far to find some tasty, satisfying southern cuisine in the Atlanta area.

Pittypat’s Porch, named after Scarlett O’Hara’s aunt in Gone with the Wind has been an Atlanta favorite since the 1960s.

The folks at Pittpat's serve good old-fashioned comfort food like fried chicken, catfish, and shrimp and grits. With all of these yummy options, the only other thing you’ll need is a nice sweet tea to wash it all down.

You don’t have to be enrolled at Georgia Tech to grab a bite at the student’s favorite hangout, The Varsity.

Since 1928, burgers, hotdogs, and fries have been the pre-game meal of choice. The Varsity is the world’s largest drive-in restaurant with some of the best fast food you’ll find anywhere in the United States.

Our Atlanta guide to dining options includes some delicious food for all budgets and tastes. Check out our restaurant section to see if something sounds good to you today.

Busiest airport in the world

Easy to get around